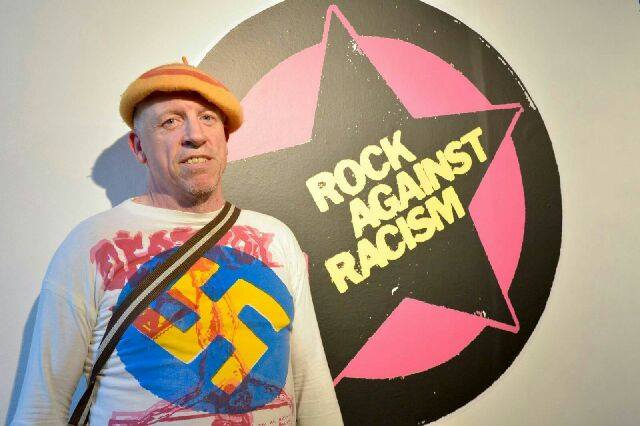 Johna was a key part of the punk scene in the late 70s and early 80s in Bradford and has amassed a unique collection of photographs and memorabilia from the period.

“I’m in the process of making  a film about Bradford punks but Bradford really was a great city back then. People used to turn up at our house from all over the country  Londoners used to say how friendly it was .
Lots of people came together under the punk banner looking for all sorts of things to connect to. Unfortunately the media slaughtered or misunderstood what punk was about and devalued it and made it look superficial or worse violent.  But it was inclusive, its members came from all walks of life.” 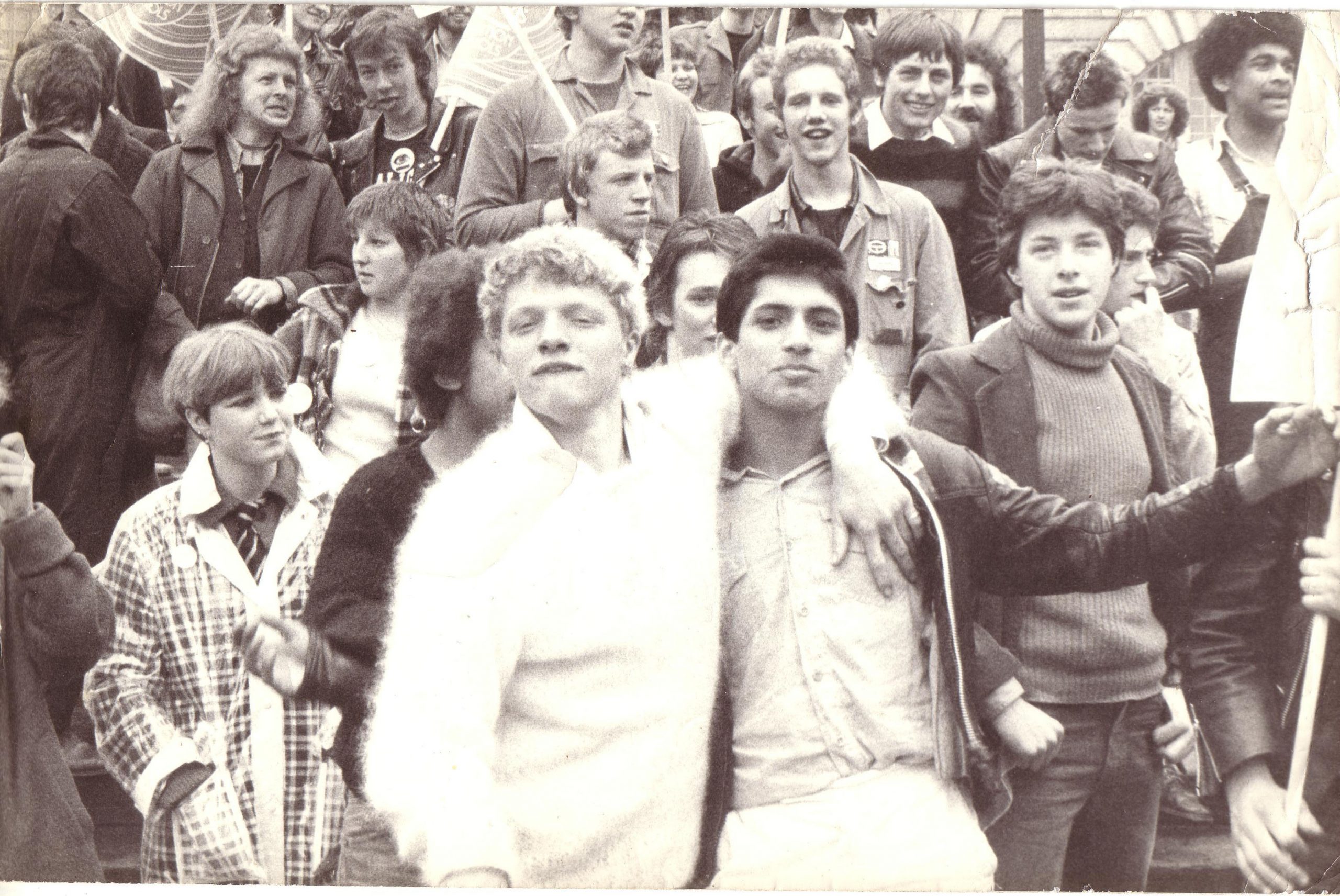 Bradford and Rock Against Racism

This pic is some of the Bradford punks at the very first Rock against Racism gig in Trafalgar Square in April 1978.  We were a very multicultural bunch. In the middle is me and my first girlfriend Zosia  (Sophie in Polish). Paul Bessy Bairstow in the white jumper  (no longer with us) and his mate Benji were both Man Utd fans. Me being a Leeds fan, we didn’t get on before punk because of the football rivalry but we were ok when we were punks. Paul has his arms round Rab, Aki Newaz’ brother from Southern Death Cult. 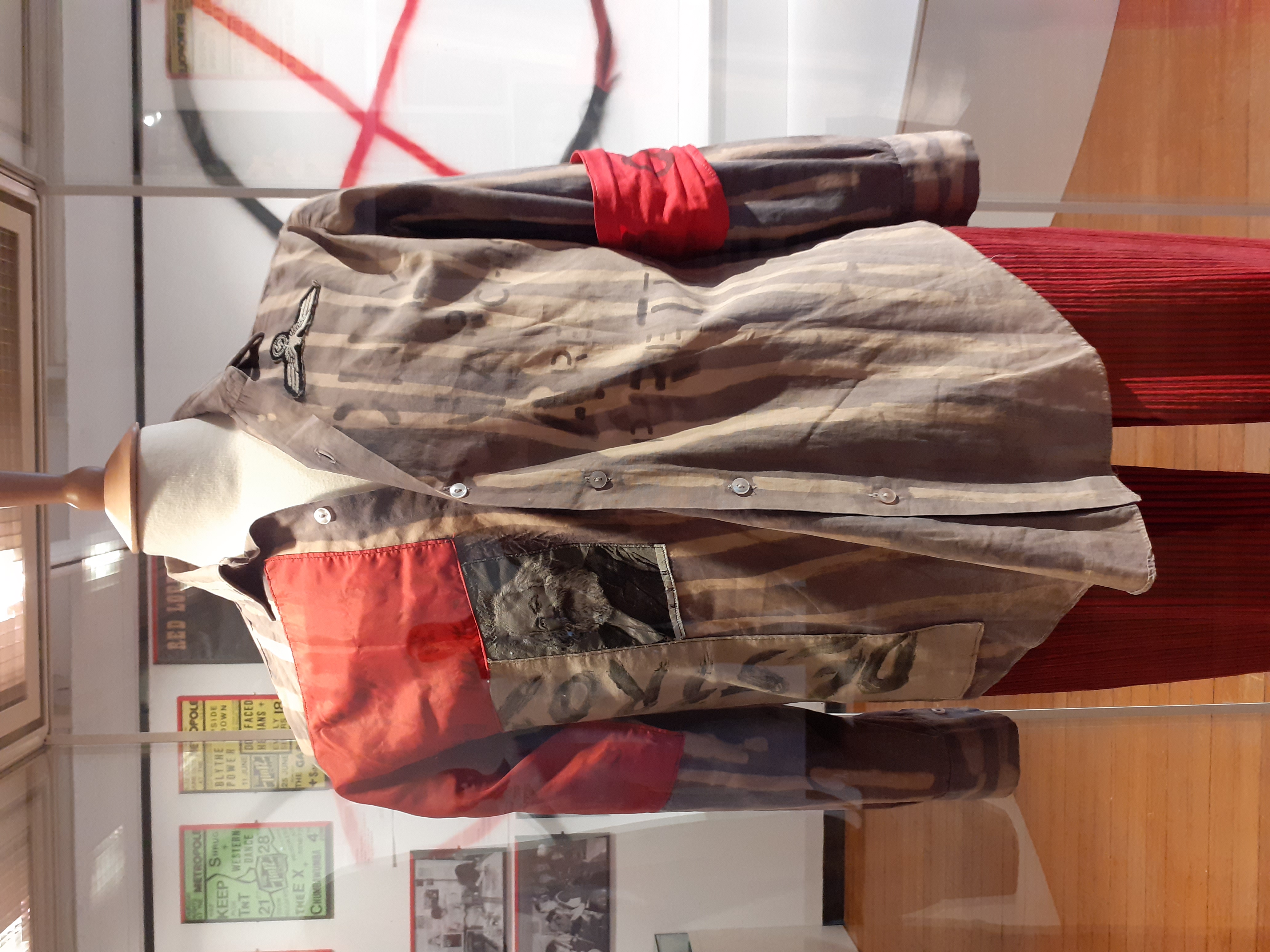 I’ve always loved Seditionaries clothes (the label of Vivienne Westwood and Malcolm McLaren, sold at their London store SEX).  I bought this off Stan Stammers  the Bass player for the Straps, Theatre Hate and Spear of Destiny. There were only about 50 made in 1976, that was the Mark 1.  This is the mark 2 which was made around 1978, again only in a small batch. Only about half a dozen are left worldwide! However much I loved Seditionaries clothes it was at odds with punk’s DIY ethics . The opposite argument would be (and I agree) that these clothes were fantastically made with creativity and quality. So you pay for what you get.

Charity shops had been taking advantage of the punk community for a while and anything that looked different that we might wear suddenly became expensive.  Which was sad because charity shops were places of inspiration for us getting loads of weird and wonderful things.  I’m thinking particularly about a certain charity shop ” Sykes Wardrobe ” which was situated at the top of town – the last shop on the row of shops across the road from the old Morrisons which had some marvellous clothes that you could never find in normal charity shops.  But their prices became so expensive because all the punks were buying from them, that in the end there wasn’t that much difference between some of the cheaper items in Seditionaries. 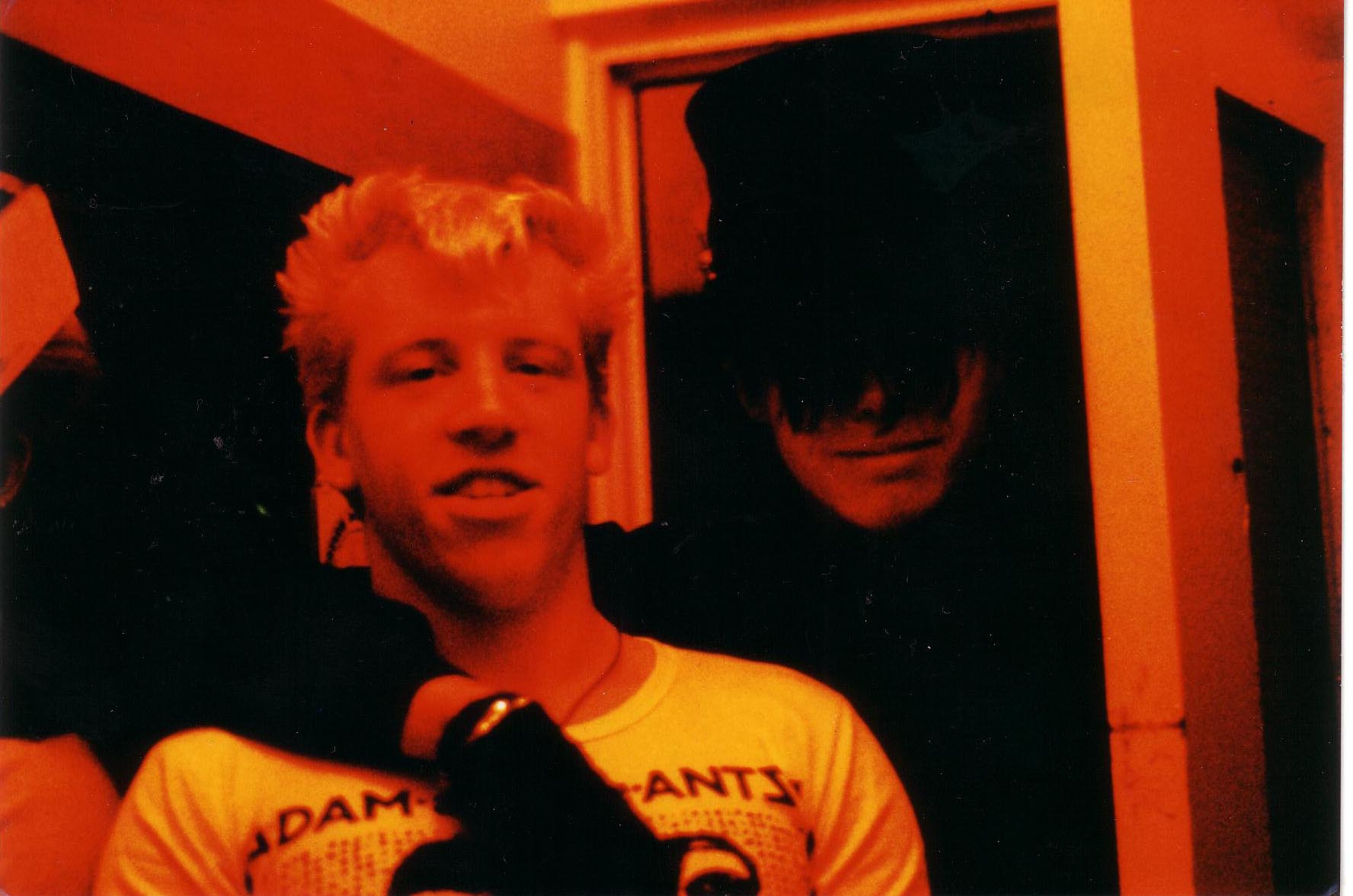 This pic was taken of me and Ian Astbury of the Cult at a party on Cecil Avenue in Bradford around 1981/82.  Ian was only around for 3 years, then went south but he was a nice lad. 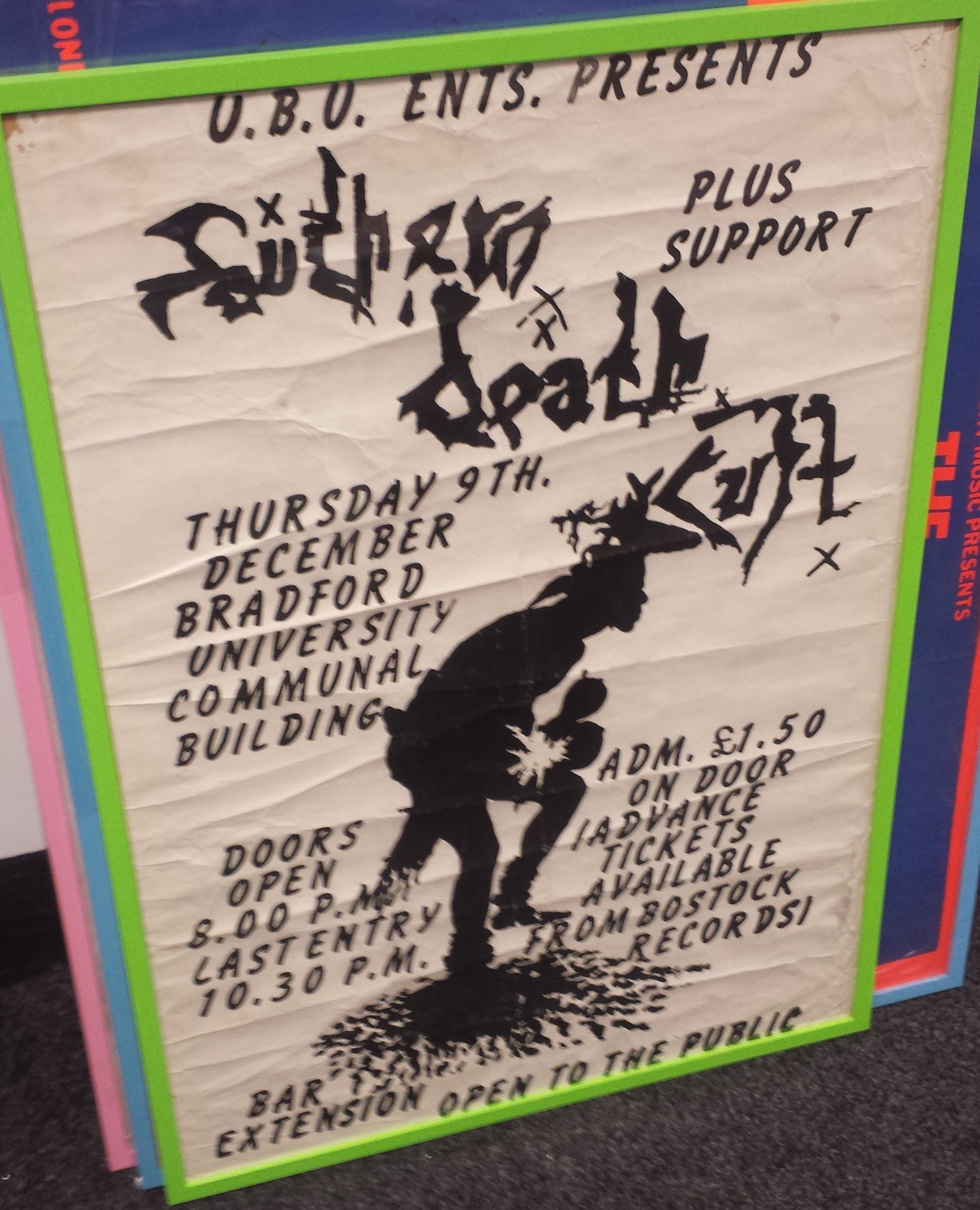 The poster is when Southern Death Cult Played Bradford Uni.  It was a memorable gig for me but for all the wrong reasons. I got there late and the bar had shut so someone said they had a bottle of whisky which I had never drank before. So I drank a pint of whisky. The effects were instant. Suddenly i was running around like a child.  I gave away tee shirts and stuff from the SDC merch stall.  There was a tv crew there trying to interview the band and i was jumping in front of the camera all the time. I had a wee in the changing rooms unaware the band were being interviewed at the time which was embarrassing. I ended up laying on a bed for three days with the room spinning round. It was worse then any illness I ever had. 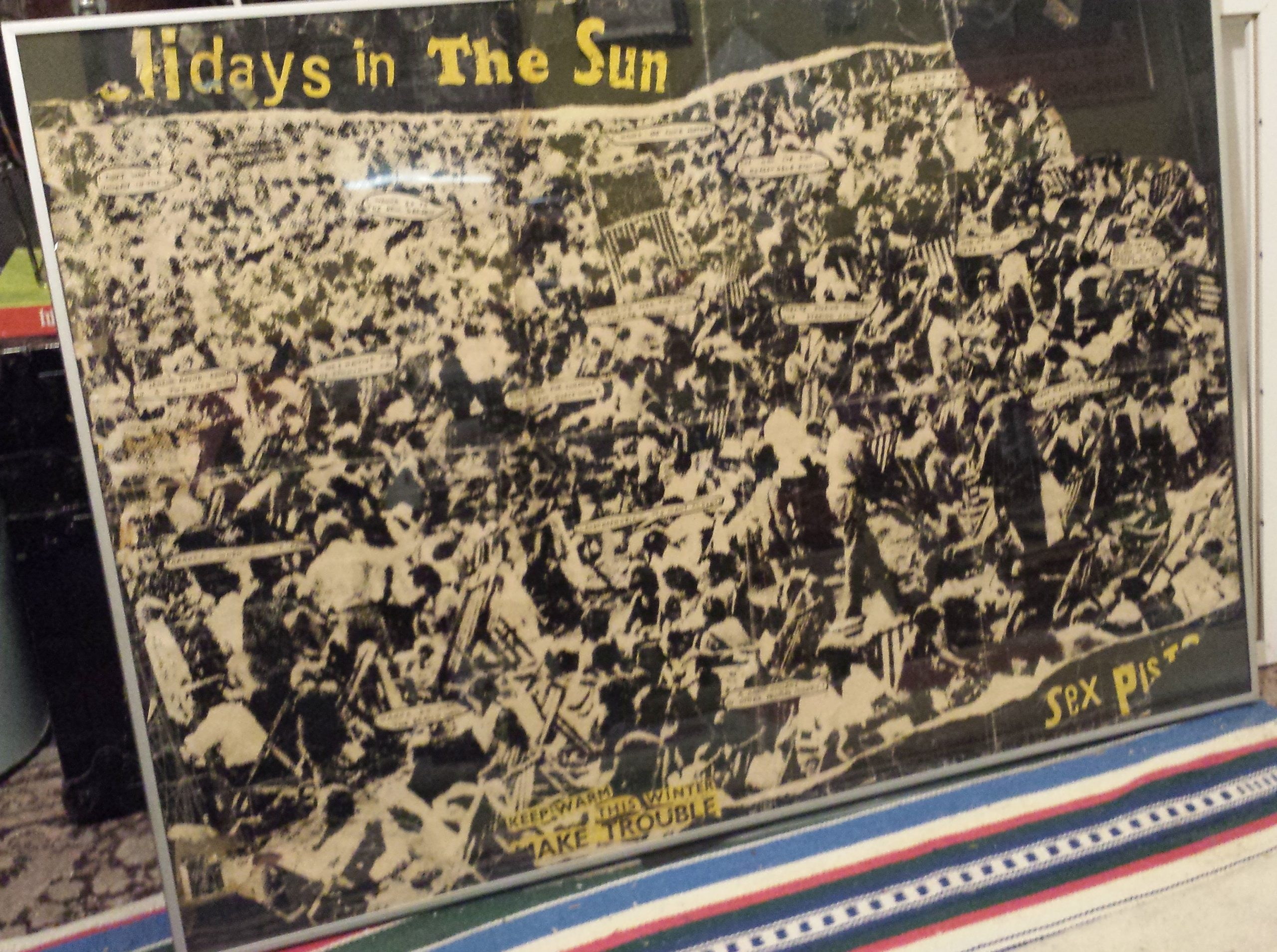 This poster is from when I saw the Sex Pistols in Huddersfield. When we arrived the walls were full of  posters and flyers but by the time we got in the venue they had all gone .When Lydon came over and tapped a cig of my mate Chris I asked if he had any more posters. He said he had one back stage I could have and this is what’s left of it 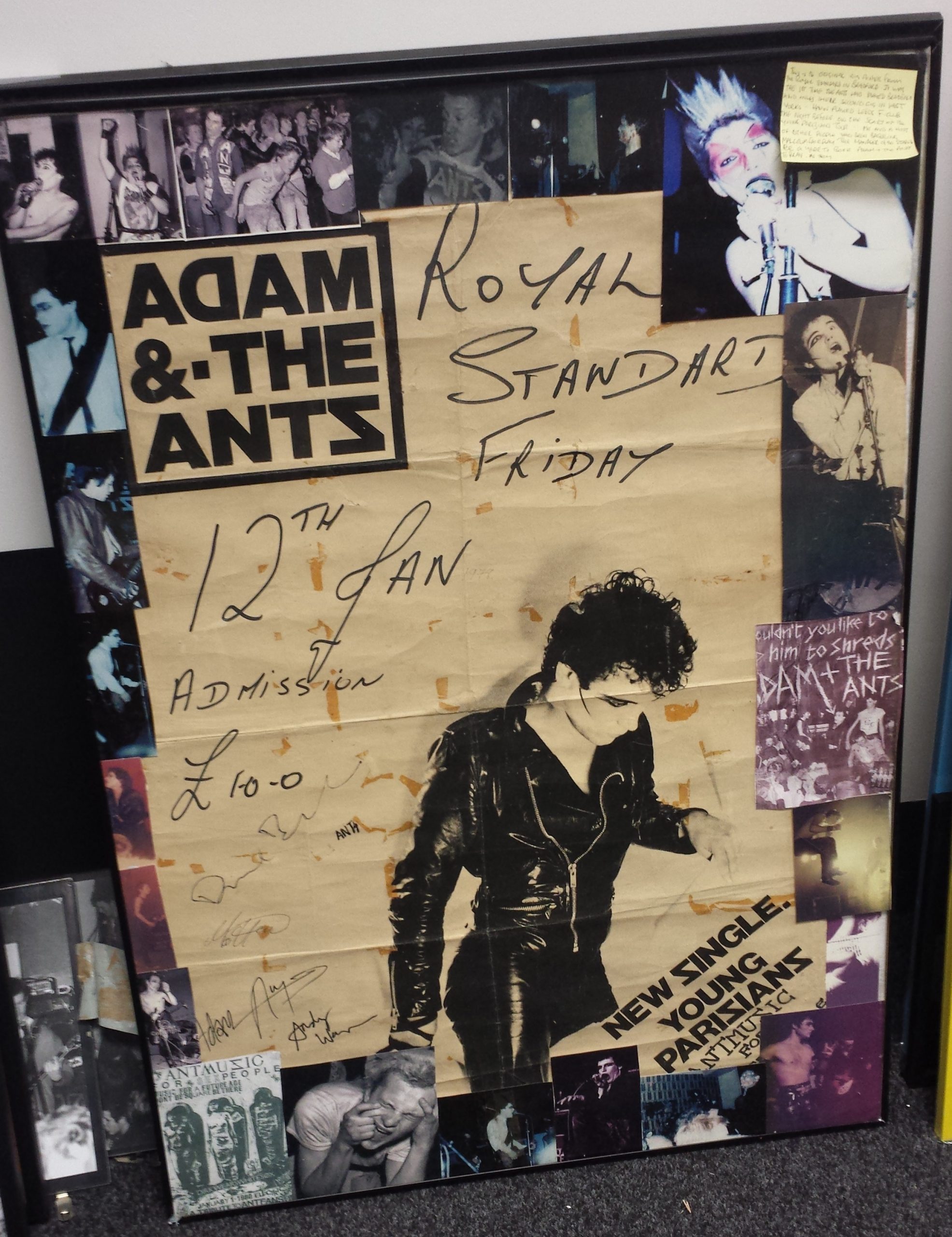 This poster is from the Adam and the Ants gig at the Royal Standard on their first visit to Bradford, 12th Jan 1979 . I wrote a book about following Adam and the Ants and one day I hope to do a exhibition with all my Ants memorabilia and possibly a documentary.